There have been two organized events to raise funds to help with Ben’s medical expenses, and those posts can be seen here and here.  However, it was just brought to my attention by a fellow blogger that nowhere have I provided information about how people who could not attend those events might also donate to Ben’s medical fund.  I can’t believe I never posted that!

It is possible to donate online here.  (http://www.gofundme.com/94klps) 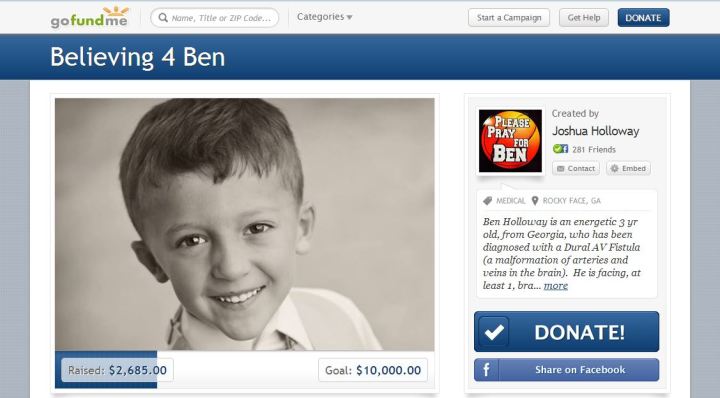 As can be imagined, the medical expenses are astronomical.  During the first operation, Dr. Berenstein placed 18 tiny platinum coils in the fistula in Ben’s brain, and each coil cost $5,000.  That’s $90,000 right there!

While at the hospital in New York, Ben’s parents were told that although the hospital itself is covered by their health insurance, the surgeon is considered to be out-of-network.  The insurance company even sent them a list of approved surgeons.  Too late!  The surgery was already done by that time, and Dr. Berenstein, the world-renowned neurosurgeon who performed the operations on Ben, was not on the list.  Ironically, the surgeons who were on the list were the ones at Scottish Rite Hospital in Atlanta who first diagnosed the AV fistula but told the family they were not qualified to perform the surgery. You gotta love the health insurance industry in the U.S. !

One thought on ““Believing 4 Ben” Helping With Medical Expenses”