Just over a week ago Ben had his third brain surgery within a period of 13 months.  Three days after this most recent surgery he was out and about again in New York City, and he DID get to go to a New York Yankees baseball game. 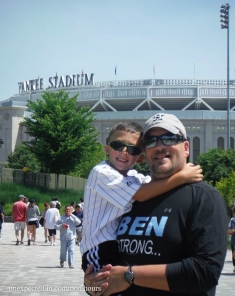 One day after the ball game, Ben was headed home.  His happy face on the airplane tells the story.  Soooo happy to go home, he later told me the hospital was like a “monster” to him.

On his arrival home he was greeted by an outpouring of welcomes from his sweet little neighbor friend. 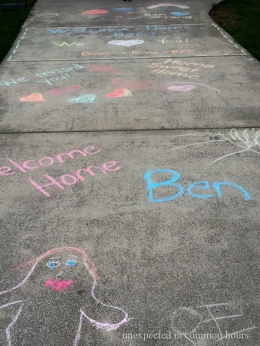 And some Welcome Home balloons from his G-Pa and me.

Ben’s mom went back to work later in the week, and Ben’s dad stayed home with him.  Isn’t that great that Ben could spend that time with his dad?!  And what a wonderful time they had together.  Here is a Facebook post from dad:

My husband and I finally were able to visit with Ben yesterday.  We had kept his little dog while he was in New York, and we met the family half-way between their house and ours (we live two and a half hours away) so we could visit for a little while and let Ben take his dog back home.  It was so good to see this smiling face…

As always, please continue to keep Ben in your thoughts and prayers.  As a result of his ordeal, he has lost some range of motion in one foot and now walks with that foot turned inward.  At Dr. B’s request, Ben’s mom and dad have contacted his pediatrician to arrange for physical therapy.  Tomorrow, Ben also will begin formal swimming lessons which not only should be fun for him but also could help stretch and strengthen the muscles in his foot.  I will keep you posted…